E3 2017 kicked off in full with EA Play. EA had lots of big announcements, Star Wars Battlefront 2, more Battlefield 1 content and a tease of Bioware’s new game Anthem. One game that may not have had the star power of the previously mentioned games but has the potential to be huge is A Way Out.

From the new development studio Hazelight, a team built by Josef Fares (the head developer of the well-received Brothers: A Tale of Two Sons), A Way Out is the story of two men who have been put in prison and have their own reasons to escape.

During the gameplay shown off at E3, we were given a trailer that starts with one of the protagonists, Vincent, put in prison. During his first days he meets Leo and quickly forms a tenuous alliance to escape. During their journey they will escape prison and go out into the world as wanted men to accomplish their individual objectives.

Given the high production value and emotionally charged story from Josef Fares, this game is expected to deliver on those same premises. During the short trailer we were able to see some of Vincent’s ambitions with a newly born daughter and revenge for (most likely) the man who put him in prison. Leo’s story was slightly better hidden throughout the trailer however everything is shaping up to be an incredible journey. 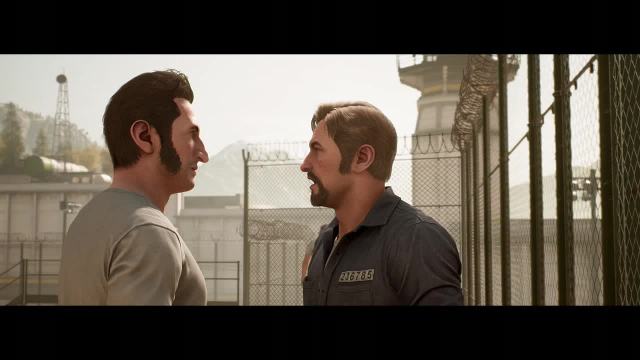 The huge hook of this game is that it is built as a completely co-op experience. There is no single player version of this game. In fact the developer during his speech urged players to play this as couch co-op. At all times the screen will be split between the two protagonists even when playing online.

Is Vincent engaged in a cutscene advancing the plot? Leo is fully playable and able to act during those events and even witness them. On top of the unique game-play loop, every scenario has multiple ways of completing your objective. Vincent is a more talk “his way out of situations” kind of guy, whereas Leo prefers to use his fists and violence. How you escape prison and subsequently act throughout the world depends on how the two players interact and approach each scenario.

This is a very new and intriguing approach to a cooperative game. This is not a Diablo style drop in and drop out co-op but something that demands it be played by the same two players and seen through to the end. Something so story driven and cinematic has the potential to be a real breath of fresh air in two player games.

What does this mean for cooperative games going forward? It’s an interesting question.

For many years “cooperative” meant two friends shooting through mindless corridors or grinding out experience points and loot. Never before with such production value has a game been based around a very human story. The vibe throughout the trailer gave a strong evocation of Heavy Rain with just a dash of Uncharted.

With a release date of early 2018 we will have lots of time to speculate and see more that A Way Out has to offer, however this game is shaping up to push 2018 off to a very strong start. I look forward to seeing what this game does not only for multiplayer games going forward, but the prospects of this awesome new studio.